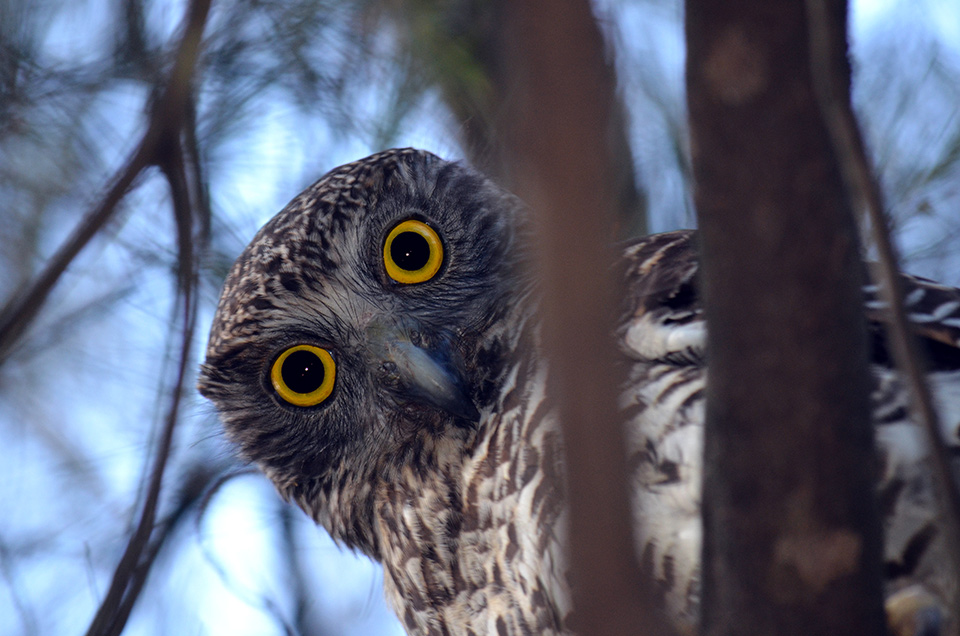 ‘Peering down toward the branch in the moonlight, Min was just in time to witness immense wings fold in on either side of two vast, unblinking, yellow eyes.

Her heart contracted. ‘Is this it? Is this what you’ve been trying to tell me?’ Min asked her wings. Before they answered, a deep soft voice called out.

’Lanar Barkington, may I speak with you?’ From Chapter 5, Not just a hunch, Min Barklin and the Silver Radiants.

A megowl from Lower Glintadel, Ottilyn had arrived to deliver the message that would change Min’s life.

When Ottilyn came into my head as a character in the book, I knew nothing about Powerful owls.  Not long after I was listening to an interview on Radio Nationals’ Conversations with Tanya Loos, a naturalist, ‘who keeps an eye on the beautiful and ferocious population in her backyard.’

Utterly entranced by her description of these wonderful birds, Ottilyn took on a whole new dimension.

Powerful owls are enormous and can grow to as much as 6-700mm tall.

Described as ‘a gentle giant with an exhibitionistic streak,’ by Andrew Stafford in the Guardian, the description that most matched the character of Ottilyn as I had written him, came from John White, an associate professor in wildlife ecology at Deakin University

He tweeted:  ‘Getting that “if I could, I would rip your arms off” stare you quite often get from powerful owls, they really are softies, with a slight anger management side to them.’

As the creator of Ottilyn, that made me hoot with laughter.  It describes him to a tee.

Powerful owls mate for life and are gentle and loving companions of each other. The male is tender in his care for the female, especially when they are producing chicks.

They trill, and coo, and groom each other in moving displays of their love for each other.

‘Ottilyn,’ the white megowl breathed softly. ‘How I have missed you.’

He moved closer and placed his cheek next to hers. Like a duet they started to sing to each other in small hoots and trills.

The strength of emotion between them was so intense, Min lips quivered. She held both hands to her chest as if to hold her heart in, moved beyond description at the evidence of their love for each other. From Chapter 27, Towards Glintadel, Min Barklin and the Silver Radiants.

Tanya Loos described one Powerful owl who lost his mate calling for her over the next seven years.  Doesn’t that make you want to cry?

SAD FACT: As much of their natural habitat—large hollows at the top of old growth gum trees have been lost through fire and logging—Powerful owls have increasingly moved into urban areas. The difficulty for them is how to breed without the hollows.

And sadly, as they prey on possums as well as rats, they are also subject to poisoning if you use rat bait.

It is unbearable to think of these magisterial creatures being poisoned.

GLAD FACT: You can join the Powerful Owls Project and help protect them.

1. Research other ways than poison to get rid of rats

The Powerful Owl Project aims to:

If you do not live on the east coast of Australia, there are bound to be similar owl projects in urban areas all over the world.  Why not find out what owls live near you and what you can do to protect them.

Add to the one trillion trees total