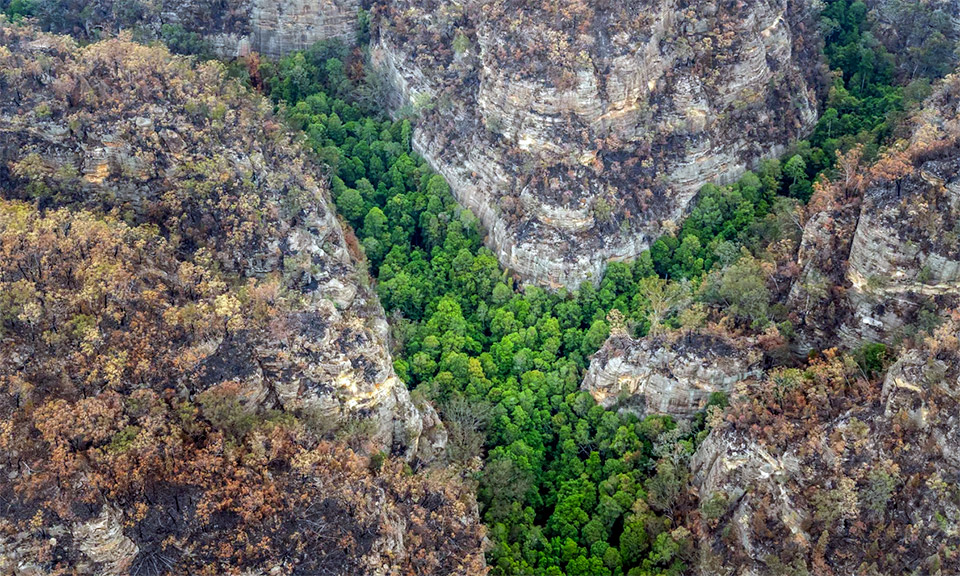 In 1994, a bushwalker walking through a remote and deep canyon in Australia’s Blue Mountains, came upon a forest of ancient Wollemi pines.

Scientists and botanists from around the world were greatly excited by his discovery. One was quoted as saying, ‘this is the equivalent of finding a small dinosaur alive on earth today.’

That’s because the pines are now known to have lived for over one hundred million years, when dinosaurs still roamed. They are the oldest species of trees on earth.

SAD FACT: In January 2020 they were threatened by the worst bush fires Australia had ever experienced.

Brave firefighters were taken to the secret valley, where they worked hard to irrigate the pines in the face of the ferocious, and fast advancing fires.

GLAD FACT: The world saw images of a strips of green in an otherwise scorched landscape as evidence that the Wollemi pines had been saved because of this heroic work. (Courtesy of The Guardian).

It is an inspirational story, that led me and Min toward saving the silver radiants in their secret, and threatened Glintadel valley, in the book Min Barklin and the Silver Radiants.

It is so inspirational to think of those brave fire fighters working against time to save these trees for the benefit of future generations.  Tell the story, because you never know where it might take someone in pursuit of protecting our planet.

To help preserve this long living species for future generations, you can buy one from the home of the Wollemi Pines.

Even a small one is quite costly, (150 mm pot is Au$115.00), but perhaps your family and friends could club in and buy a communal tree to plant in your local park?  They are only shipped from the Wollemi Pine in Australia, but ask your local nursery if they are propagating seeds.

As they grow well indoors, you could also keep it in your home. Imagine care-taking something so rare and old.

Add to the one trillion trees total
Scroll to top