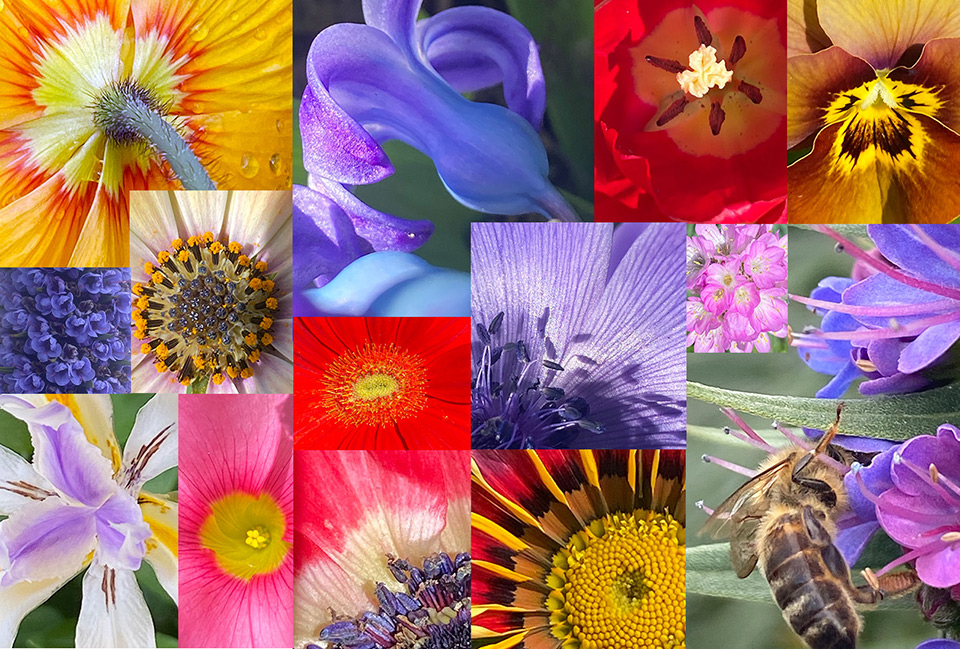 ‘We’ve recruited all the swarms already in the valley—we think nearly two billion buzzles. That’s a lot of pollen-gathering.’ Bipziz waggled his stripy body, evidently pleased with himself.

‘Two billion!’ Min translated for the others. If there were that many buzzles, how many billions of other beings had to be evacuated? There wasn’t a second to waste.

Spring in my Min’s garden is like walking into Aladdin’s cave. The colours are so jewel-like, they hardly seem real.  Most astonishing is the share artistry of nature.  Much of it to lure bees.

It is fascinating to observe how flowers have evolved with such diversity, each to support bees but also to compete for their attention.  It’s like social media on steroids.

‘Over here, my pink is pinker than that.’ ‘I have a deeper centre.’ ‘Look at my sticky nectar pads.’  ‘Feel my iridescent satin skin.’ ‘I’m sunnier.’ ‘How many more diamonds do you need?’

The bees they seek so desperately to attract appear to pay scant attention to their whimsical cries. They’re on a mission.  Pollen, pollen, and more pollen, in a frenetic bid to get back to the queen and deliver what she needs to lay her pupae and sustain bee life.  We can hear their purpose in their hum.

There are at least 2 trillion bees currently in the world. Estimates place the number of honey bee colonies worldwide at 81 million and the total number of managed beehives at about 100 million. (Based on data from the United Nations Food and Agricultural organization)

Between 2018–19 in Australia, honey and beeswax production was valued at $162 million, and the unrecognized value of pollination was believed to be in the order of $14.2 billion.

According to the United Nations Environment Program, of the 100 crop varieties that provide 90% of the world’s food, 71 are pollinated by bees.

So, it goes without saying that our buzzle friends have a value beyond their charm.  In fact, according to Forbes magazine if you were to think of these ‘critical creatures’ as a public company, it would have a market cap of $20 billion!

Worth a flower of two of your attention to support bees, don’t you think?

Min says . . . about how to support bees

SAD FACT:  In researching honey bees and concerns for their decline, it’s true that the interrelated issues of all the gawple-made pesticides, drought, habitat destruction, nutrition deficiency, air pollution, and global warming are harming bee colonies.

GLAD FACT: But, according to a graph developed from United States Agriculture Department survey data, there has been a steady increase in the number of honey bee colonies in the States from 2008 to 2021.

INTERESTING FACT: A major issue is not so much that bees are declining, but that there are not enough bees to pollinate the crops needed to feed the world’s population.  Which is a different problem to bees dying.  We just need to support bees to increase their numbers.  We need billions more of the fuzzy flyers.

Apart from supporting everything that might work in time to keep our planet from over-heating, there are many things we can do individually to support bees—these industrious and life-saving insects to their siren-luring flowers.

Here is a list according to the organization Bee Conservancy.

Give beehives a home (become a beekeeper)